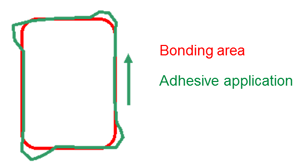 Dosing too late, dosing too early:

Start of the bead application dependent on:

The control must “wait” until the start of the bead reaches the component.

Likewise, the dosing procedure must be stopped before reaching the end point.

Cause: Pressure drop at the start of dosing

At the end of the dosing process the outlet valve closes and the feed pump stops. There then follows pressure equalisation along the length of the line. The moment the outlet valve is opened again, the adhesive there is under a higher pressure than during the rest of the application process, causing initially “too much” adhesive to be applied. The effect is in some cases intensified by delayed start of the robot.

The effect is also intensified by air in the system (inadequate de-aeration on changing the container) or hoses/lines having inadequate dimensional stability.

Overhanging strands of adhesive at the end of the dosing: 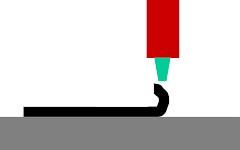 Cause: Entrapped air at too high application rates; especially for high viscosity adhesives