In everyday language:
Differentiation based on the thickness of the adhesive film.

However: An elastic bond can, depending on its use, also be structural!

Differentiation: Whether a thick or thin adhesive film is used depends on the application and the adhesive. Clear differentiation, for example by citing a millimetre thickness, is not possible. There is a gradual transition that depends on the modulus and force.

Important to know: For different adhesive film thicknesses, the mechanical properties such as the strength and elongation at fracture differ.

Force F → Deformation of the adhesive

Note: Every adhesive has a maximum permissible deformation. 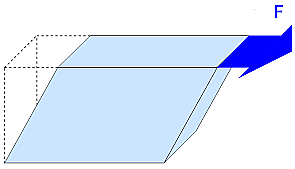